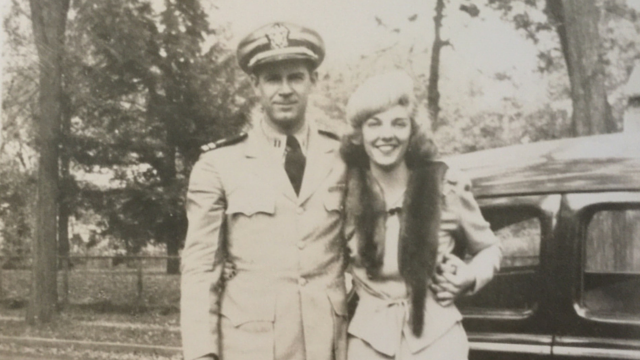 A woman rummaging through a box of post cards at an Olympia flea market found a one-of-a-kind treasure Sunday: a beaming young couple captured in a black-and-white photograph.

Kresta Duncan said she has no idea who it belongs to but would love to reunite the photo with its rightful owners.

Duncan hopes to find to the couple or their family. She said the photo was likely taken in the 1940s, but doesn’t know for sure.

She uncovered the photo after noticing an off-to-the-side shoe box full of photographs that seemed to range from the late 1800s to the early 1960s.

But to Duncan, the photo of the smiling couple was a diamond in the rough.

“It was the first time my husband and I have ever been [to the flea market] and while walking through, a couple boxes caught my eye,” Duncan said. “They just looked so happy in that moment, and why would anyone get rid of such a great picture?”

Duncan said she was initially drawn to the photo because of the man’s uniform — her father was in the U.S. Navy and her husband is a U.S. Army veteran.

Duncan said most of her family has served in the U.S. Armed Forces.

If you or someone you know can help return this photo, Please email Duncan at: alexiann84@hotmail.com